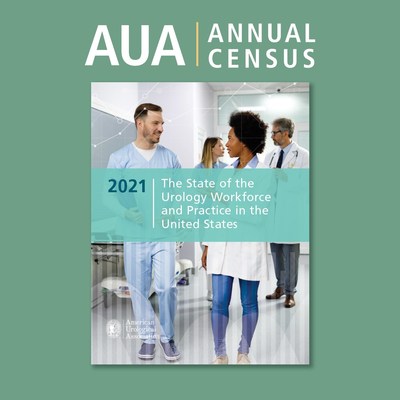 This new data, as well as further findings regarding the growing number of urologists utilizing telemedicine in the United States and the causes and impact of professional burnout, are highlighted in the American Urological Association's (AUA) newly released 2021 Annual Census report, The State of the Urology Workforce and Practice in the United States.

Additional findings from the 2021 AUA Census:

"The AUA U.S. Census data continue to demonstrate an evolving urology workforce, as well as other facets of the specialty, including the long-term structural and practical impacts of COVID-19 on practicing urologists," said Danil V. Makarov, MD, MHS, chair of the AUA Data Committee. "The Census serves as a resource about the realities of practicing urology during a pandemic for the urology community as a whole as well as health policy leaders."

Further data trends regarding work/life balance, patient visits, retirement details, as well as other practice characteristics can be found in the 2021 report. The full report can be found on the AUA website at www.AUAnet.org/CensusReport.

About the American Urological Association: Founded in 1902 and headquartered near Baltimore, Maryland, the American Urological Association is a leading advocate for the specialty of urology and has nearly 24,000 members throughout the world. The AUA is a premier urologic association, providing invaluable support to the urologic community as it pursues its mission of fostering the highest standards of urologic care through education, research and the formulation of health policy.